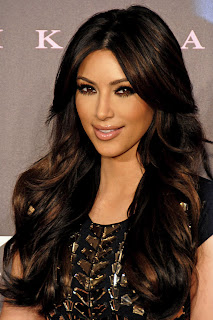 I am sure you have all heard by now that Kim Kardashian has filed for divorce from Kris Humphries just after a short 72 days of marriage. Speculations that this marriage was a sham from the start and said to be a publicity stunt to cash in on millions of dollars has been circulating the web since the divorce announcement was made official.
My thoughts?
No girl in her right mind would endure such an embarrassment and humiliation when she is already worth millions!! Seriously! I know it is easy to look at all the cash she did earn for her public displays of the relationship, but do you really think someone with Kim Kardashian's Hollywood reputation would need to sink this low to earn a few extra paychecks? Okay, okay. I do remember the infamous sex tape ... I personally think that was the moment she was put on the map, but since then, homegirl had made a name for herself!
I honestly feel like she did love Kris Humphries at one short moment, but really did get "caught up in the hooplah" (as she states) that became the wedding. I think she is like a lot of girls who want to fall in love and live happily ever after with that man of their dreams. Kris was just not that Prince Charming she was meant to be with. And after watching him on TV, I really don't find anything charming about the guy. Just saying.
Honestly, I wish the best for Kim. I know she can recover from this - she has such a strong family base for love and support. In my own opinion, I thought she looked way better on the arm of Reggie Bush! They looked good together and I think they would have made gorgeous babies! Kris and Kim just looked creepy together ... the height difference really bothered me. It looked so un-natural. Again, just saying.
at November 02, 2011

I agree. . . i dont think that it was for the money, that whole famly is worth millions!!

I was not the least bit surprised!

Even if she is making a name for herself, she went about all of this the wrong way. I'm not surprised at all.

Not surprised it ended up this way. After watching a few shows with him in it I really did not like the boy. And they didn't seem like a good match whatsoever!

Speechless seriously!!! This girl is a joke.