I did this survey on my myspace profile and thought I'd repost it here for all to enjoy. Feel free to snag it for yourself ... I would love to see how you met your hubby!! 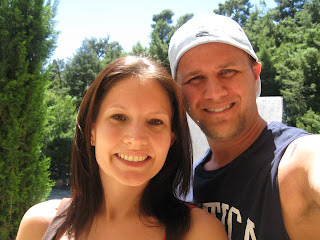 How I Met Tim
A little info about how I met my hubby!

Where did you meet?
Eastside Athletic Club. I worked there in daycare and at the front desk, and Tim saw me one night when I was with the kiddos. He then asked my co-workers 'who that girl was'. The next night I was working at the front desk and he scheduled a massage and was put on the locker wait list ... I had no idea he did all that just to talk to me! A few days later, my co-worker told me that Tim was asking about me.

What was the first thought that went through your head when you met?
He was an older boy ... he was 20 and I was 17, so I was pretty excited. He was really cute ... a surfer boy style with a sweet personality.

Do you remember what he/she was wearing?
work out clothes, shorts and a sleeveless tee

Where was the first time you kissed this person?
He kept me hanging for a few weeks! Kisses on the cheek were his way of building up to the perfect moment ... the first night of snow in January 1999. Awwww .... it was like a movie!!

Where did you go for your first date?
Red Robin ... he orderd my dinner for me! Clucks n Fries and a strawberry shake. I was very impressed! We then went and saw a movie ... Patch Adams.

How long did you know this person before you became a couple?
We went on a few dates before we became 'official'. I didn't know him before our first date, even though we had attended the same high school together!

How did he/she ask you out?
My co-worker had told me that he was going to ask me out, so I was all excited and giddy. When he came out of the locker room from working out, he just walked right passed me and left! I was bummed, but I went back into the daycare with the kids. A few moments later, as I was changing a diaper, Tim knocked on the door and peeked in. He asked if I would like to go out sometime, and I casually said yes. I didn't want to seem too eager .. lol!

Has this person ever proposed to you?
Oh yes!! I completely had no idea he was going to propose!! We had been dating for 2 years, and I was bugging him to get engaged. I was only 19 and Tim wanted to wait another year or two. On Christmas Eve, Tim had set up a slideshow of all the pictures we had taken while we were dating and played our song along with it. At the end of the show, Tim got down on one knee and asked me to marry him .... awww, the memories!!

Do you and this person have kids together?
Two beautiful boys, Maddox and Sean

Have you ever broken the law with this person?
Partners in Crime, LOL!!

When was the first time you realized that you liked this person?
Right away ... after our first date I knew that I could fall in love with him!

Do you get along with her/his family?
Yep ... better than my own!

Do you trust this person?
Absolutely! With everything!

Do you see them as your partner in your future?
He is my world ... we will be together forever and always!


What is the most expensive thing they gave you?
He supports my shopping addiction! LOL!!

What is the thing you do that gets on his/her nerves?
Anytime I have a bad, 'don't care' attitude

Where do you see each other in 15 years from now?
Maddox will be 19 and Sean will be turning 17 .... with our boys almost out of the house, we will be making our vacation plans!!

What causes the most arguments?
We really don't argue that much! I have learned to be submissive and let him be the leader of our pack. I'll speak up when need be, but for the most part, we get along great!!

I read this on your myspace!
It's always fun to hear how people met. I don't think I'd ever heard your story.

That was a nice little story! I love hearing how people meet too!