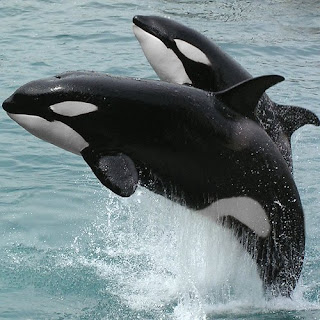 One thing y'all probably don't know about me yet is that I used to have a passion for Bottle-Nosed Dolphins and Orca Whales. From the time I was in junior high school, I wanted to grow up to be a marine biologist. Study them in their natural habitats, learn all about their behaviors and experience the worlds in which they live. I was so awe-struck by these beautiful creatures. Remember the movie, Free Willy? The star of that movie, Keiko the Killer Whale, actually resided for a while here on the Oregon Coast. My parents took me to visit him at the Oregon Coast Aquarium, and I was so absolutely mesmerized by such a massive and incredible animal, that I wanted to get up close and personal with him. Better yet, I wanted to train these magnificent animals at SeaWorld.
Don't laugh.
That was what I told my guidance counselor going into my freshman year of high school what my career goal in life was to be. Diving in tanks, teaching whales and dolphins new tricks, feeding them and giving them hugs and loves. I promise, I am not joking.
My dream was quickly shattered when that counselor told me that I needed to learn the German language in order to get into any marine biology field. Say what? Yeah, apparently these creatures only understand German. Huh. Who woulda knew? My 14-year-old self wasn't about to try out those crazy classes. Ha!
To get to my point of this post, I was very saddened to see the recent events that have taken place at SeaWorld in Orlando, Florida. While it is sad that a life was lost, my heart aches for Tilikum, the Orca, whose life was taken from him when he was just 2 years old. While Dawn Brancheau's death was tragic, she died doing what she loved. Tilikum has been captive for 28 years and is likely depressed and mentally insane being held captive in a swimming pool.
While I don't believe that releasing him back into the wild is the best thing for him (he wouldn't likely survive), I do feel that these animals need to be taken off of the public circus stage and be provided with a life they deserve. Build pens out in the ocean that are miles long so they are protected, yet given the opportunity to live a some-what natural life. Do not capture them, cage them, and make them perform mindless tricks for human pleasure. This kind of "research" is sad and unnecessary.
This accident was not the whale's fault. I don't care how many times he has had issues in the past, this guy was ripped from his world and expected to adapt to our own. He is a 12,000 pound animal that only knows his own instincts. I can only hope that some day our world can stop commercializing on the suffering of animals in captivity.

i totally agree with you!!!! I hate zoo's for the same fact!!! Animals belong in the wild. end of story!

I say all this as we are heading to Sea World in two weeks...but they are not called KILLER whales for no reason.

ITA! They're wild animals & meant to live that way.
Did they have to put him down? Why not just find some sort of retirement living program? It has to be hard on them mentally to be caged & expected to perform for so many years. Why not let them do shows for so long & let them live their rest of their life in peace.

You’re so sweet April and I couldn’t agree with what you said more. I did visit Sea World for the first time last April and though the show was wonderful. I was amazed at the creatures, but felt horrible when I saw the tanks that they were kept in. They’re not big enough at all and it would be like a human living in a prison cell.

Sad story all around. Stopped by to welcome you to SITS!
Kim

Stopping by from SITS to say welcome April, glad you joined us!

I remember Keiko and wanted to go see him before they released him but I don't live in OR so I didn't go. People seemed to think it was weird that I wanted to go.

I've been wondering what will happen to Tilikum.

I had the SAME dream as a kid... until I couldn't pass chemistry in college. That was the sign I needed...

What a sad story that was huh? Just wanted to stop by and welcome you to SITS. We are so happy you joined our group. You will meet so many great people. Enjoy your evening!

True! One thing that I always say is...they are still wild. You know, you can take the girl out of the country, but not the country out of the girl (Me) The same goes from WILD animals. My husband is a wildlife biologist (no German needed:) and he too says if something were to happen in the wild with an animal he would die doing what he loves.

I like the idea of zoos and education....rehabilitation, rescue.... It really has a lot to do with the people. Passion is everything. (So much to talk about on that subject, so I'll stop for now.) Thanks for the captivating subject.

WELCOME to SITS! It's great to have a new SITSer. Bonus, I'm hosting a giveaway for NEW sunglasses. Like most, yours are lost or bent...come on over.

Yeah, I don't get how them doing tricks make us understand them better???

I am stopping by from SITs to say welcome to the party:-)

Dezzy Lou Where Are You said...

Totally agree 100%- I feel sorry for the little fella. He needs to be in his own environment doing what whales do best! Poor big guy.

Great post. Situation was summed up perfectly. An animal is an animal, they know no different.

yep. i totally agree but people will never admit they're in the wrong, it's soo much easier to blame everything on the poor defenseless whale.

your posts are so well written, i love your blog=)