My sister-in-law, Jackie, just got a new cookbook, Deceptively Delicious. Jessica Seinfeld (yes, Jerry's wife) came up with special recipes that kids would eat - recipes with hidden vegetable purees in them. I had heard of this fine art of veggie hiding last year with the book, The Sneaky Chef, and had contemplated trying some recipes out with Maddox - my 4 1/2 year old who gags on ALL fruits and vegetables! I came to the conclusion back then that he would eventually learn to like these foods and didn't buy the book. To this day, the only vegetable he will eat is cream style corn and refuses all fruits.
After hearing the enthusiasm in Jackie to try out her new recipes, I invited myself over to make a mess in her kitchen. 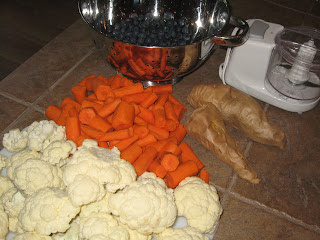 We bought fresh carrots, cauliflower, and sweet potatoes (which, by the way, were not orange like we have usually known ?!?), and started steaming our veggies at 1pm this afternoon. By 4pm, I was tired, had a headache, and was cleaning up my section of the counter. The boys had made a nice little mess of their own on the deck, and I was ready to call it quits with the purees.
Prep time took about a half hour just to get the veggies cleaned and peeled. The sweet potatoes (can anyone tell me why they were not orange??) took an hour to bake before we c 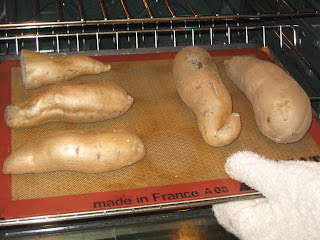 ould puree them, and then mashed down to about a cup of puree. Each recipe usually calls for a half a cup or more. The cauliflower and carrots both took about a half hour each to steam in Jackie's new steamer, then took a little while to get them fully pureed. W 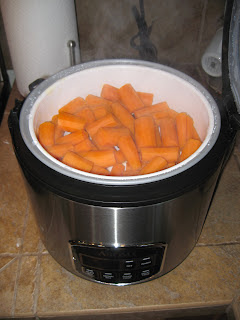 e used a mini food processor, a Magic Bullet, and a full size blender - talk about a mess to clean up!! Each puree has to cool completely before being stored in ziplock bags, so we used lots of bowls and spoons, too ... more dishes to clean (So Sorry, Jackie)!! Bleh!
After leaving Jackie's house with my three little bags of purees, I told myself that I would not be doing that again! I am a simple person. I don't like a lot of prep time and long cooking times for the meals I make. I don't even use my crock pot - and that makes the meal for you!! Later this evening, we had mom and dad, Pat, Jackie and Luke over for dinner and I made loaded mashed potatoes as a side dish. I put in about a cup of the cauliflower puree into the potatoes along with my cheeses, sour cream and bacon and wondered if anyone would notice the extra veggie. My potatoes were a hit! Jackie and mom knew my hidden secret ingredient, but the guys, including Maddox, didn't suspect a thing! You honestly couldn't taste anything out of the ordinary.
Before leaving Jackie's house this afternoon, Jackie made one of the fruit dips from the book - a chocolate peanut butter dip. The secret ingredient: carrots! It was a simple recipe of peanut butter, chocolate syrup, and cream cheese, along with pureed carrots. We tested out the dip on Mr. Picky Eater, and he practically licked the bowl clean (mind you, he ate it with a spoon and not with the apple slices)! He even asked for more!! 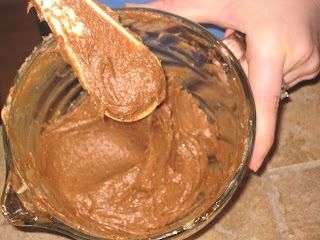 My son got 2 extra servings of vegetables today and he enjoyed every unknown bite of them! As drawn out as the process was today, I am pretty impressed with this sneaky way of cooking. I offered to pay my sister-in-law to make my purees for me so I wouldn't have to hassle with it, but I am definitely willing to give it another try. It was fun hanging out today, chatting and testing out Jackie's new cookbook. I am amazed that these purees really are hidden, yet the nutrients are there! I may even go get The Sneaky Chef for more recipe ideas! More to come ... 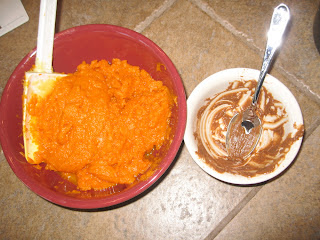 Email ThisBlogThis!Share to TwitterShare to FacebookShare to Pinterest
Labels: Reviews and Opinions

My sister bought these books for her little guys. They are 2 and 3 and they are picky eaters. I need to buy it for my husband. He even stated I did. He is not a veggie eater (even at age 46). It is also rare when he eats fruit.

I have heard about these books and the sneaky secrets but never thought about trying them out. Thankfully Jaron will eat some veggies and all fruits but if I can sneak in more then I am game to try.

I know...
...it took me 4+ hours to do my purees.
It didn't take as long for me to steam.
And I got more baggies than you... you poor thing, you only took home 3 little baggies. eek.
How disheartening.
I made the mashed potatoes too, and they were the best potatoes I've ever made.
YAMS...YAMS...YAMS...
Instead of actual sweet potatoes, yams are the ones that give you that great orange color.
She said it only takes her an hour a week.
Ya right.
Phshaw!! I laugh in her face.
I love the idea, but it was a lot of work.

April, I just read your whole page! I couldn't stop - it was all so interesting and confirmed yes, just how cool you are! You're really good at writing. Anyway, I have this bk too and have used it but forget now... there is one that I think said to add carrots to ragu which was totally good! :)