Bet you've never done this before ...

So I was driving home last night, boys sleeping in the backseat, and an oncoming driver flashes his brights at me - why? I have no idea. My high beams were not on and I wasn't speeding ... maybe it was simply an accident. Anyways, as I get flashed, something hits my front windshield on the passenger side. I thought to myself, "That was a huge bug!" I glanced over and noticed that this huge bug was stuck in the windshield wiper, and it's wing was flapping in the wind. Gross! I was just about ready to turn the wipers on to release the dead insect when a street light illuminated the Tahoe. OMG! I did not hit a bug ... I hit a bird! Wait a minute - birds don't fly at night! (Do you like the thoughts running in my head?) I drove under the next street light and saw the creature - A BAT!!! I HIT A BAT!!! And it was stuck on my car!!!!

Freaking out (but remaining in full control of the car - ha, ha), I called my hubby to explain to him that he had the manly duty of taking care of the removal when I got home. And of course, he did (I love my man - he takes care of everything!!). He did think it was funny though that I had to take pictures so I could blog about my rare incident.

As much as seeing a dead bat up close and personal creeped me out, I was sad for a moment. This poor little thing was just minding his business when he was blinded by some bright lights and flew his little self right into his death. I don't think he suffered, but I am sure his bat buddies are wondering what happened to him. LOL! 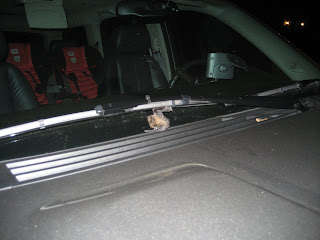 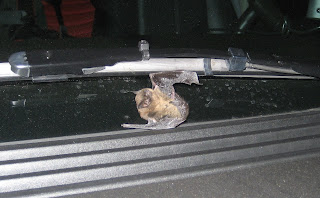 OH GROSS! Makes me sick, because I don't like bats and they creep me out. I haven't had a bat fly into my windshield yet (knock on wood) but I've driven through a swarm of bees on the highway and that was really odd and gross to clean off the car. LOL!!!

What??? You have some bad bat karma or something.

"Bat Woman" in the "Bat Mobile". :)
It's bird, it's a plane, it's a big Tahoe ramming unsuspecting bats dead out of the sky!!