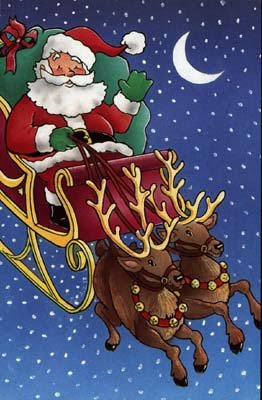 And the Mom of the Year Award goes to ...

Oy! I know that parenting is an ongoing learning experience, but my oldest son, Maddox has given me a run for my money this week! Our soon-to-be 5 year old is a very smart little guy. He is very analytical and worries a great deal when he doesn't quite understand something. So the famous question arose this last week: Is Santa Claus real?
Now for most parents, this is a no-brainer. Of course he is real! But, Mr. Maddox was certainly perplexed with all that entailed with this magical character. Not only did Santa, flying reindeer, and fitting down chimneys confuse him, but so did good old TV commercials with parents playing Santa. So I thought I would be doing good by telling our little man the truth. Gasp! I know, but bear with me. I explained to him that Santa was simply a storybook character and was all part of the fun of Christmas. I explained to him that many children believe that he is real though and that he could not tell anyone that he was not. This seemed to pacify him.
He took this way too maturely for his little young self, and that brought on my guilt. When I was little, I believed in Santa. I remember being all excited going to bed at night, and waking up to all the presents under the tree that Santa had left! How could I have taken away such innocence? Yeah ... I felt like crap!
So, I recorded The Santa Clause last night, and sat down with Maddox during Sean's naptime today to watch it. I made a huge deal out of Ol' Saint Nick and explained to Maddox that mommy didn't realize he was real until after she was reminded by this movie. It took some convincing and some enthusiasm, apologizing for steering him wrong, and a ton of questions, but I was successful in restoring the wonderful idea of Santa Claus!! Thankfully, his little mind is still easily persuaded. Now he and his little brother can share in the excitement together!
No credit here though, I feel like the Grinch! So sad!
at December 05, 2008

GRINCH! Thank goodness for "The Santa Clause" movie.....when i first seen that movie- I said I will never forget to let my kids watch that movie~ it is the best for all those wonderful questions they have!!!

Just wait till he starts kindergarten...they take ALOT of the innocence away:( Like learning about make believe v/s real...Thanks for that right before Christmas school system...u couldn't wait to hit that subject!

Glad he has his enthusiasm back!

Ha ha...April...
I guess I'm a grinch.
I plan on telling Wyatt that Santa Claus isn't real if and when he asks!
:)
BUT....I do love the Santa Claus, Tim Allen does such a good job.

good job restoring his belief! I finally had to tell Sean who is 8 because for the last few years his friend have told him he isn't real. But i figured he is in 2nd grade and i dont want him to get made fun of. I still have two more I can have fun with being Santa.