It's official. I am so sad. And mad. How could they end without a proper series finale? It's too bad ... it really was a great show! I am glad I have season one on DVD - will they come out with the final, unfinished, second season? 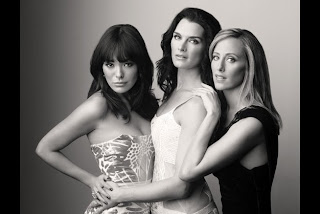 'Lipstick Jungle' Canceled
After months of speculation, it appears that 'Lipstick Jungle' has officially been canceled -- at least according to its star, Brooke Shields. "It was going to stay, and we just were officially told it's finally not coming back," she told E! in an interview late last week. "It's very sad. I think a lot of people were really sad, but I think we hung on a really long time. It was three great years that we've been working on it."

That is so sad. But on a happy note, I got my prize! The notecards and pads are so cute and the body butter smells delish. Your book is on its way!:)

so NOT cool...i loved this show...bummer. this is why i cant get addicted to tv shows-always cancel the ones i love, boo hoo.

Nuts. Another one bites the dust. Why are all the stupid shows still on? HUH??? Any ideas folks?

Got my goodies today! Thansk April...they smell yummy!! My dd is already asking to use the lip gloss...she may have a fight on her hands..LOL!

I just recently watched season 1 and got hooked. Sad I can't continue watching... :(