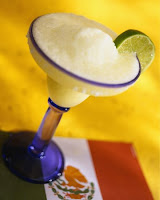 Cinco de Mayo. The Mexican Army defeated the French forces at the Battle of Puebla on May 5, 1862. Not to be confused with Mexico's Independence Day which is actually September 16th (thank you, Wikipedia).
While this day is not widely celebrated in Mexico, it gives reason for Americans to party in the middle of the week. Awesome.
at May 05, 2009

Is it really not celebrated in Mexico? hahaha! That's funny.

Thanks for the history! I had no idea... ;-) well, some idea but not that detailed. We do love our cinco deMayo!!! Yum Yum!

is that why you put your sombrero on and partied it up? hee hee!!! :)